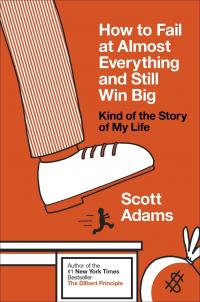 Scott Adams has likely failed at more things than anyone you’ve ever met or anyone you’ve even heard of. So how did he go from hapless office worker and serial failure to the creator of Dilbert, one of the world’s most famous syndicated comic strips, in just a few years? In How to Fail at Almost Everything and Still Win Big, Adams shares the strategy he has used since he was a teen to invite failure in, to embrace it, then pick its pocket.

No career guide can offer advice for success that works for everyone. As Adams explains, your best bet is to study the ways of others who made it big and try to glean some tricks and strategies that make sense for you. Adams pulls back the covers on his own unusual life and shares what he learned for turning one failure after another into something good and lasting. Adams reveals that he failed at just about everything he’s tried, including his corporate career, his inventions, his investments, and his two restaurants. But there’s a lot to learn from his personal story, and a lot of humor along the way. While it’s hard for anyone to recover from a personal or professional failure, Adams discovered some unlikely truths that helped to propel him forward. For instance:

• Goals are for losers. Systems are for winners.
• «Passion» is bull. What you need is personal energy.
• A combination of mediocre skills can make you surprisingly valuable.
• You can manage your odds in a way that makes you look lucky to others.